So lovely: Stonebwoy’s kids perform with him on stage at pre-Father’s Day show, videos earn praises for them

Stonebwoy’s Children Jidula And Janam Join Him To Perform On Stage, Video Warms Hearts, Stonebwoy’s children Catherine Jidula and Livingstone Janam Satekla have given their father a pre-Father’s Day moment. 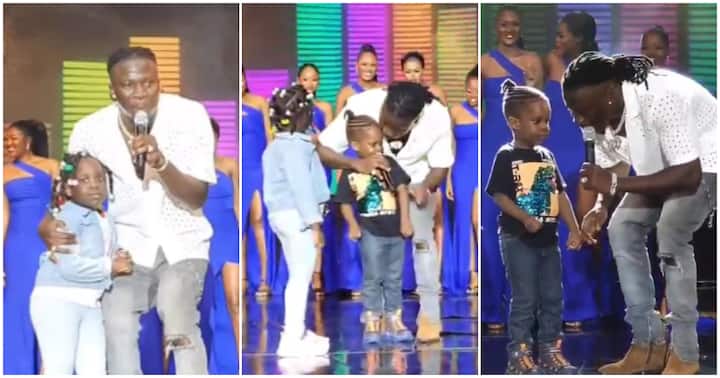 Jidula and Janam joined their father on the stage as he performed at an event at the Accra International Conference Centre on Saturday, June 18.

In videos sighted , Stonebwoy is seen delivering a thrilling performance for patrons at the event.

Midway through the performance, Jidula and Janam, appeared on the stage in beautiful outfits with the audience cheering them on.

Not long after, Stonebwoy paused his performance and started talking about Father’s Day which was only a few hours away. He expressed his pride while narrating how JIdula made him a father for the first time.

Later, Stonebwoy got in between the children and started performing his hit song, Sobolo , while urging them to sing along and dance to it.

Stonebwoy also performed his latest song, Therapy, with the kids. He put the microphone in the faace of Janam who started singing immediately.

Fans react to Stonebwoy’s performance with his children

The videos from Stonebwoy’s performance have stirred loads of reactions on social media. Below are some of the reactions.

“This is one of the most beautiful things I’ve seen in my life.”

“Wow, this is beautiful Janam be the boy.”

“The boy no the song for inside aswear but how to deliver is the problem..very soon e go flow all en dad songs ❤️