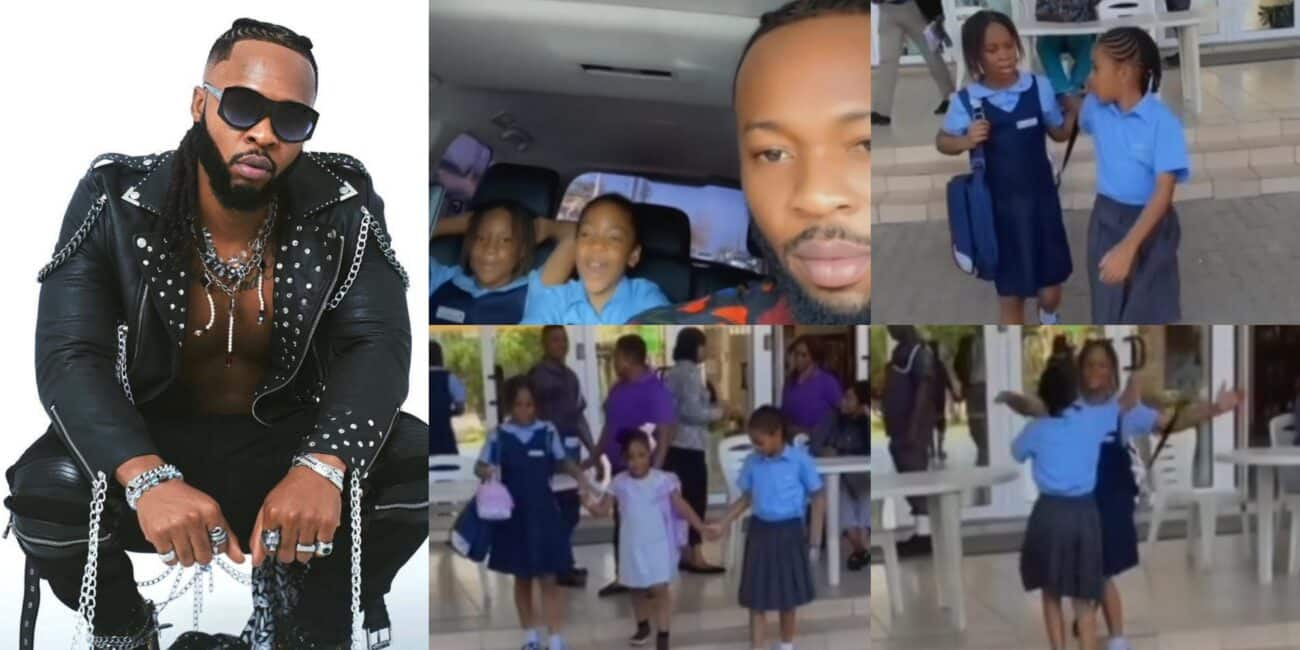 Nigerian singer, Chinedu Okoli better known as Flavour has received accolades over an adorable video of his daughters.

The singer was on daddy duties on Monday, as he picked up his cute daughters from school.

Sandra Okagbue, who is his first babymama, has two daughters for the singer. His second babymama is Ex-MBGN 2013, Anna Banner, who has another daughter for the singer.

It is believed that Sandra and Flavour are married. Even Sandra’s sister, Bella Okagbue confirmed it.

In the newest development, the singer paid a surprise visit to his daughters’ school.

In the adorable video posted online, Flavour’s daughter from Anna Banner, could be seen running to embrace her half sister.

The two hugged and picked up their younger sister, who was excited to see her father.

The adorable video has since melted hearts as many hailed him for uniting his daughters.

One Genny Daniels wrote, “Teach the children to love themselves this is good to watch

One Nurse Dimma wrote, “Lovely how they are all in the same school

One Queen Kateelfrida wrote, “It’s the good the daughters are bonding

One Ogesnazzy wrote, “Ijele Africa 1, I love how you are bringing them up together as one siblings, you are doing well ezigbo nwoke

Flavour opens up on having children outside wedlock

Singer Flavour N’ambania, had said he did not plan on having children outside wedlock.

The singer confessed during an Interview with BBNaija’s host, Ebuka Uchendu.

Flavor, who is tagged as a womanizer in the music industry, confirmed that he has his way with women and has great tastes when it comes to women.

When asked if he agrees with people’s opinion of him being a womanizer, Flavour said, “That’s people judging (me), you know. As long as you are in the public eye, you would get stuff like that. It was never planned, though I cannot deny that I love beautiful women. I am an African man, not a white man. I have tasted too with women. I don’t just go with anything.”

He further disclosed that he knew that it would be difficult for him to handle women due to the nature of his career as a singer.

He said, “I knew that with my job at some point, it was going to be very difficult with women.”

However, the father of three said his children give him joy; though he didn’t plan on having children out of wedlock, the sight of his children excites him, and that is all that matters.

“I am very happy when I look at the kids, and I believe that is all that matters. I am so happy because I never expected everything to happen this way. When you also look at the positives, you would see happiness in it. You have to take it. This is life, and you have to live it. I swallow everything and get on with it. I make myself happy,” he added.

According to reports reaching Kemi Filani News, the high life crooner had finalized all marriage rites with Sandra.

The final rite reportedly held on Monday August 3,2020 in Enugu and there was a large crowd who were prevented from using their phones to take photos.

Enhle Mbali Mlotshwa’s picture of her and her boys after school, leaves her…